Of average height and build, Thomas is a quick man with an even quicker dagger and and even quicker wit. He thinks. He keeps his dark hair short as well as a neatly kept beard, and is almost always smiling. Until recently, he would often wear what appeared to be plate mail emblazoned with the symbol of Torm. Though he appears to be armed only with a pair of daggers and short swords, “Tom Foolery” has a rather diverse and seemingly inexhaustible supply of daggers and other manner of concealed weaponry. He often calls upon his roguish talents to aid his allies both in and out of combat. Tom appears easy going and care-free, but in reality is fiercely loyal to those he calls his friends and will do whatever it takes to keep them from harm.

Thomas Fola’ry began his life in Tantras, orphaned as a young child. He was left at an orphanage by his mother. She was heard of again, presumed dead. Almost as soon as he could walk, the streets became his new home, and he quickly learned many talents to help him scrape by, be it a silver tongue to coax coin or a meal from a passerby, or deft fingers to liberate money or trinkets from an unsuspecting victim’s pockets. Though it was far from an ideal way to live..it was A way to live. And live he did.
Growing up, he developed values and morals that weren’t quite on par with the many urchins and less than legitimate denizens of the city. He rarely if ever stole more than he needed, never killed, and only stole from those who looked like they could afford it. He would often give portions of his take to others even less fortunate than him. And the jokes. Tom was rarely, if ever serious, no matter the circumstances. He would always be telling jokes or wisecracks or engaging in activity that could be considered less than mature. He often went by Tom Foolery because of it.
He was often and constantly approached by various thief organizations, but turned all of them down. It was nearly to his own peril in doing so, however, as some of the more sinister organizations were growing increasingly upset with his refusal to conform. Fortunately, before anything bad happened, Tom embarked on an adventure.
It was overheard in a tavern that a group of adventurers, headed up by a paladin of Torm, was looking for a sneakier type to help explore old dwarven ruins found deep within the Spine of the World. The group included the Paladin, by name of Ser Thoril Shieldheart, as well as a few others that aren’t important to the story. Tom nor Ser Thoril realized that this adventure would spark one of the truest friendships of both their lives.
Where Tom was carefree, joking, or otherwise fooling around, Ser Thoril was careful, calculating, and stoic. As could be expected, the two didn’t much get along, at first. As their adventure wore on, however, the two came to respect each other, saving the other’s life on many occasions. That respect quickly blossomed into friendship. After their return from the Spine of the World, the two of them chose to continue their partnership and adventure together.
Over the years, their friendship only became all the stronger. Tom adopted Torm as his own deity, and Ser Thoril told a joke. (Fair trade, in Tom’s view.) The two of them embarked on many adventures, making many other friends…and enemies. Foremost of these was a minor demon that the two of them helped in banishing. Unfortunately, this demon had a powerful, and vengeful, sire.
It wasn’t long until agents of this demon managed to set a trap for the friends and through an evil ritual, transported to two of them to the demon’s own plane. Tom was about to give in to despair when Thoril called out to their god. He reached out and touched Tom, and Tom felt an inner warmth course throught and within him. Hefting his two blades, the two leaped in to the fight of their lives. IT was a long, bloody battle, and at the end the demon lay dead, forever. Ser Thoril was not far behind, nor was Tom. The combination of the grueling fight and being a mortal in the most evil of places caught up with them. He collapsed.

His eyes opened. Before him was a being in full armor with the symbol of a gauntlet emblazoned on his chest. There was only one thing this being could be: Torm himself. HE stood there conversing quietly with Thoril. “Welcome back, hero.” Torm said, looking to Tom. “It is now Thoril’s time to leave your world and spend eternity with me, in my service. It is not yet your time, though, my friend. Say your farewells, then I’m sending you back.”
Tom, still mostly speechless, went up to his old friend. Eyes glistening with unshed tears he simply nodded and grabbed his friend’s shoulder. “Good luck, Tom. I’ll be watching.” Tom then woke up, in a bed in Torm’s temple in Tantras.
And so began the adventures of Ser Thomas Fol’ary. He devoted a lot of his time to rooting out evil. He often would infiltrate various groups and cults posing as one of them or endearing himself to the leaders of said groups, only to capture or eliminate them as the situation dictated. To help allay suspicion, and to do his best to honor his fallen friend, he would do acts that would be considered as good, the ones that would be known to the public, he took on the guise of a true paladin of Torm, complete with armor that was merely his own leather armor that was enchanted. The church sponsored him…reluctantly. But they had to admit that though his tactics were unorthodox, they did produce results. They…tolerated him. They couldn’t publicly or privately fund him in his endeavors, which Tom understood. To help him along that path, he’d hire himself out to adventuring groups using his roguish skills to help in whatever way they were needed. Sometimes he’d use his disguise of Ser Thomas to get himself ahead, but he made sure to never use it to bring about evil or the like.
One day, while in Baldur’s Gate, Tom was visiting the local church to Torm when he caught wind of a rather attractive bard looking for adventurers to clear out the Firewine Bridge. He sought out this bard, Sam, in the persona of Ser Thomas Fol’ary. It didn’t take much effort to find her, and that’s how Tom met Sam and Segard. He hinted at the more clandestine nature of his talents and was brought aboard. After taking on the expertise of an elf magus, Ava, the quartet set out. On the way, they met a woodsman, a rather different fellow by the name of Varnon. Now a five man group, they set out for the Bridge, ready for anything.

The group quickly learned the type of person Tom was, and what seemed at first a mere tolerance of his antics soon grew into acceptance, and (though not all of them would admit it) they rather enjoyed his nearly unending stream of jokes, sarcasm, and just general merriment.

To say it was an easy affair would be a lie, but despite hardship the party reigned victorious, and the Firewine Bridge was again made safe for travel. After bidding farewell, Tom returned to Baldurs gate for a time, doing some freelance work around the city and outlying areas. As if by chance, just when Tom was wondering how his friends were doing, he received a letter. Segard wanted to meet him in Beregost. He had a proposition… 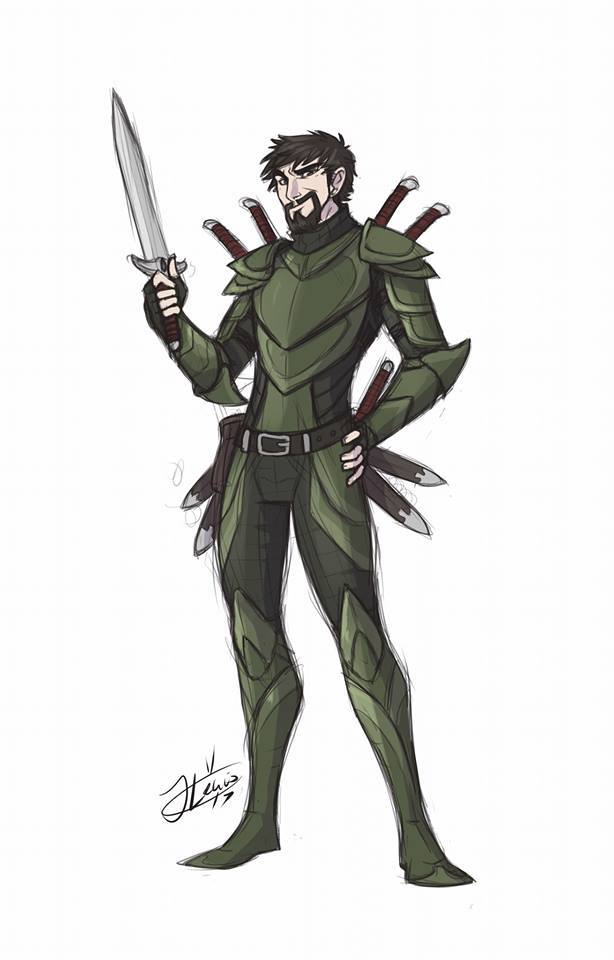