Even at an early age Ava found great interest in creating things. As she grew up this interest gained a focus in smithing both armor and weapons. As she learned the art of smithing from her elven teachers she found it useful to also gain martial training. Eventually Ava combined her martial training with the knowledge of the arcane forming a bond with her first “masterpiece” weapon she crafted. After finishing her schooling from her elven masters Ava set out to learn all the different smithing styles of the different races. The time spent with humans was a simple one and it instilled a mind of simplicity and practicality. Although difficult and tiring at first her time spent with the dwarves holds some of her fondest memories. Iagi Firecutter the first dwarven smith that accepted Ava as a live in apprentice and the first person to make her question the decision to learn smithing. After crafting several dozen horseshoes none of which were up to Firecutter’s standards she was required to continue her martial training, but now under his supervision. Brutal days of work followed by training lead only to nights of total exhaustion and only after the first tenday was she allowed to move on from making horseshoes to sharpening old dull blades. After the fourth tenday Ava broke down and got into an argument with Iagi only to have him remain silent and pass her a flaggon of ale. During the shared drink he admitted that he never thought she would be able to understand the mentality of a dwarven smith due to the fact that elves and dwarves focus on different aspects of the craft. After finishing their drinks Iagi requested Ava craft a sword using everything she knew about the craft. Although not the best sword he had ever seen crafted the work she had finished showed both dwarven strength and eleven eloquence. After finishing her apprenticeship with Iagi she set off at his instruction to seek out experience in both battle and the world in general always keeping to a saying of his “Trust those that care for their weapons.”. Shortly after leaving Iagi a meeting of interesting adventures including a tall and broad-shouldered human, with fair skin and hair accompanied by a talented and well endowed woman took place. Introductions were made the man was known as Segard and he wielded no weapons other than his bare hands and the woman went by Sam and while she wielded a whip with great dexterity her voice was her greatest weapon. After seeing Ava’s skill in both combat and crafting Sam extended an invitation to join their party along with an individual know as Thomas Fol’ary. Seeing this as a perfect opportunity to further her experience and gain new knowledge Ava accepted the invitation and thus began the next part of her training. 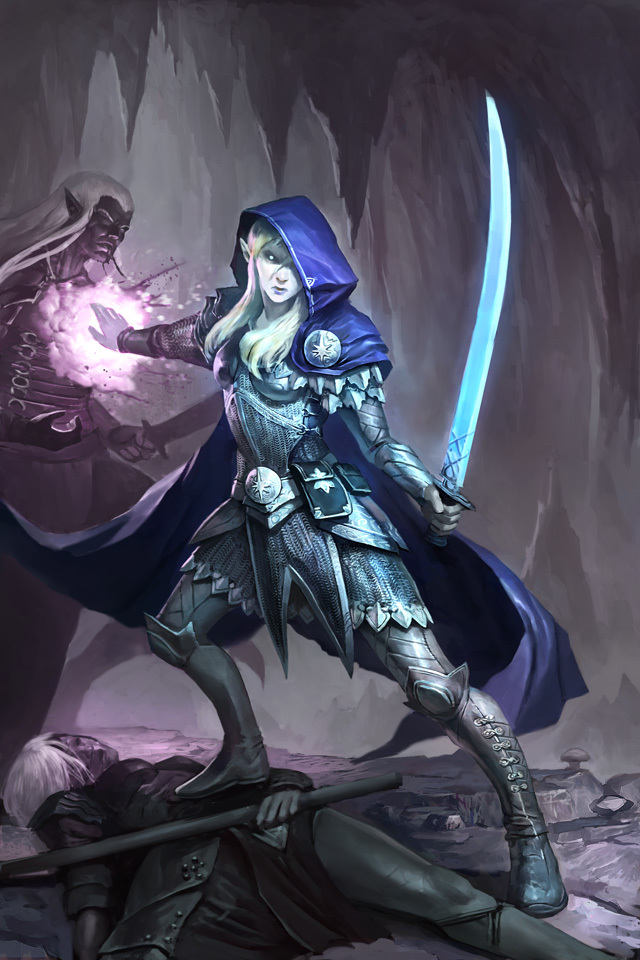